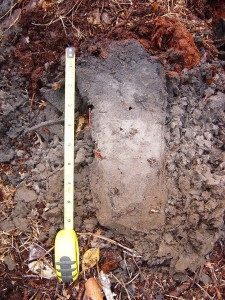 A hydric soil is a soil that formed under conditions of saturation, flooding or ponding long enough during the growing season to develop anaerobic conditions in the upper part.

The concept of hydric soils includes soils developed under sufficiently wet conditions to support the growth and regeneration of hydrophytic vegetation. Soils that are sufficiently wet because of artificial measures are included in the concept of hydric soils. Also, soils in which the hydrology has been artificially modified are hydric if the soil, in an unaltered state, was hydric. Some series, designated as hydric, have phases that are not hydric depending on water table, flooding, and ponding characteristics.

The lists of hydric soils were created by using National Soil Information System (NASIS) database selection criteria that were developed by the National Technical Committee for Hydric Soils. These criteria are selected soil properties that are documented in Soil Taxonomy (Soil Survey Staff , 1999) and were designed primarily to generate a list of potentially hydric soils from the National Soil Information System (NASIS) database.

Hydric soil lists have a number of agricultural and nonagricultural applications. These include assistance in land-use planning, conservation planning, and assessment of potential wildlife habitat. A combination of the hydric soil, hydrophytic vegetation, and hydrology properties define wetlands as described in the National Food Security Act Manual (Soil Conservation Service, 1994) and the Corps of Engineers (COE) Wetlands Delineation Manual (Environmental Laboratory, 1987) and COE Regional Supplements. Therefore, an area that meets the hydric soil definition must also meet the hydrophytic vegetation and wetland hydrology definitions in order for it to be correctly classified as a jurisdictional wetland.

The national list of hydric soils is maintained in a computer file and is updated yearly. The most current national electronic list of hydric soils may be obtained directly from this website. State lists of hydric soils are also available electronically from this site or as hardcopy from the NRCS State Conservationist in each state. The NRCS also maintains, for each conservation district in the United States, lists of map units that contain, or may, in some delineations, contain hydric soils. These detailed lists are available by contacting your NRCS State Conservationist and are recommended only for preliminary use in making wetland determinations. Field Indicators must be used for all on-site determinations of hydric soils.